Penelope is an oyster of the species Pinctada Margaritifera. She comes all the way from Tahiti! She likes to play in the ocean, and spends all of her time there.

Penelope lives in a tiny house made of two shells. These shells, called ‘valves’ protect her from danger from predators, and make her feel very safe. Sometimes, she opens the door to her house to catch passing plankton for her dinner! 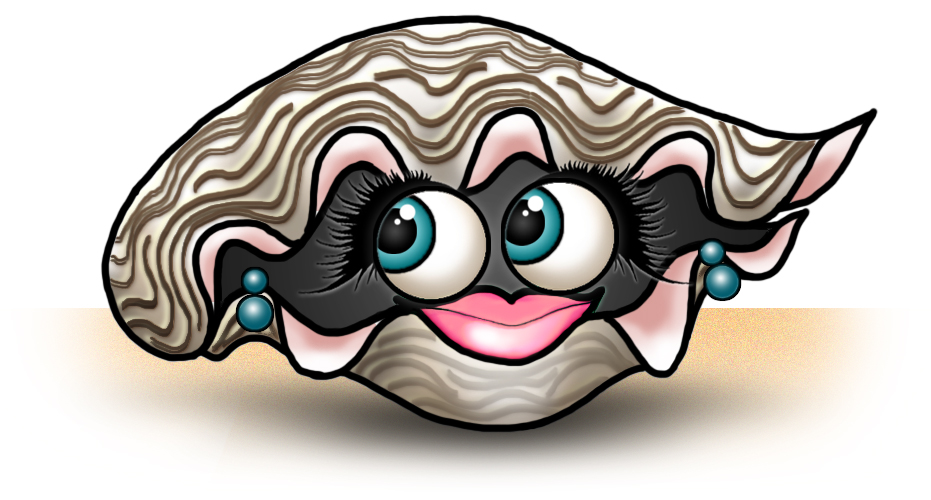 One day, a tiny object found its way inside her nice little house. It somehow managed to get itself stuck, and in such a tiny house, this can get very uncomfortable! To make the object less of a nuisance, Penelope decided to redecorate!

Penelope’s shells are made of a pretty material called ‘nacre’. She makes it herself by absorbing molecules from the water she lives in, and then layering them over and over onto the walls of her shells. She decided that this would be the best thing to use to cover the tiny object, so she started to coat the irritant with nacre to make it nice and smooth, and much more comfy!

Penelope covered the irritant with the ﬁrst layer of nacre, but it still felt rough and jagged, and it kept jabbing her in the gill. She coated it with a second layer of nacre, then tried to roll it around until it was less pokey. After a third layer of nacre, it was starting to look very shiny and pretty, so Penelope decided to add a fourth. Pretty soon, it was quite a sight! Penelope’s object was becoming a beautiful shade of blue, and it was starting to glow.  She kept adding more and more layers of nacre and rolling it around just to see how it would look in different parts of her house.

The object started to get so big that it began to be a bit crowded, but one day, just as Penelope was thinking that she might have to move to another shell, Penelope got pulled up in a net by a kindly old man.  He looked at Penelope this way and that.  Penelope peered out of her barely open door at the kindly old man.  “This is just what I was looking for!” she heard the old man say.  “I will take this pearl to the market and sell it for a big price so I can buy fish for my dinner!”

Penelope’s front door opened, and in came a small pair of tweezers to take out the very lovely, very large pearl that Penelope had made.  She had so much space in her house now, that it felt a little empty!  Penelope was going to miss her lovely pearl.  But before putting her back in the sea, the kindly old man said, “Don’t worry little shell, I will give you a tiny piece of something that you can play with.”  With that, the door opened again and in came the small tweezers with a tiny piece of sand.  Penelope was lowered back into her ocean home.  Now, Penelope had a new something to play with!  “This time,” she said, “I’m going to make it pink!  And she went on laying coat after coat of beautiful nacre on her beautiful pearl.

Penelope recommends checking out the Pearls International Pearl Library to find out more about how pearls are made!

Call Pearls International Customer Care at 386.767.3473, or email us at customercare@pearlsinternational for even more great information about our all-time favorite subject, pearls!