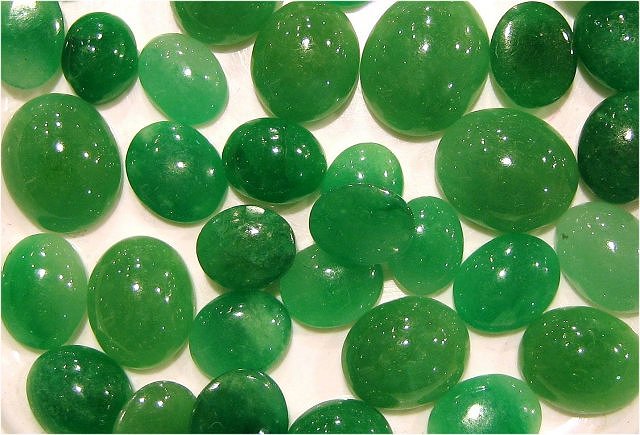 Today’s Gemstone Spotlight will leave you feeling green with envy!

Jade is known for its striking green color and exceptional toughness. But did you know that jade comes in more colors than just green? While green is the most valuable, jadeite is also found in yellow, red-orange, white, gray, black, brown, and light purple. Nephrite, another variety of jade, is found in yellow, brown, black, gray, or white in addition to the classic shades of green.

Throughout history, Jade was valued for its toughness. While it ranges from a 6-7 on the Mohs scale, it is a very durable gem and was often used to create tools and weaponry in several different cultures. The mineral buildup of Jade makes this possible, as both jadeite and nephrite are metamorphic rocks composed of tiny, interlocking crystals. So if it doesn’t get very high marks in hardness, how is it valued for being tough? Interestingly enough, hardness and toughness are tested very differently in the jewelry industry. Hardness (as measured on the Mohs scale) ranks the stone’s ability to withstand scratches and indentation, while toughness judges the stone’s ability to withstand breakage. This is why jade rings may become scratched over time, but ancient Chinese jade sculptures still stand unbroken.

In a jewelry application, jade is typically beaded or polished into a cabochon. It is rarely faceted. When polished, jade should have a glassy to oily luster. This stone is popular in both men’s and women’s jewelry.

It is most commonly seen in rings in cabochon form and carved into beads or discs for necklaces. In the east, the most popular piece of jade jewelry is the carved jade bangle, which is thought to bring protection to the wearer. At Pearls International Jewelers, we have stunning pearl and jade pieces in our Dream In Color Collection, which uses traditional jade beads strung together with pearls in necklaces and bracelets. We also have lovely jade earrings.

Aztecs and Mayans believed jade could cure pain in the side of the body. In fact, the name jade came from Spanish explorers calling the gem “piedra de ijada,” literally meaning stone for pain in the side, which they coined while observing these cultures holding jade pieces up their sides. It is also thought to bring good luck and prosperity.

Perhaps the culture in which jade has the greatest value is China. The Chinese believe jade encourages longevity and strengthens your health. Meaningful sculptures are carved from jade all over China, giving it further meaning. A popular example of this is the traditional flat disc with a hole in the middle, known as “bi” in Chinese, a symbol of heaven. Other common Chinese jade sculptures include butterflies, which symbolize a long life, and dragons, which represent power and prosperity.

In many stories and legends, the popular jade bangle of eastern cultures (particularly China), was accredited with miraculous recovery from illnesses. It is said that the bangle would break at the critical moment and the wearer would recover as a result. In similar tales, the wearer of a jade bangle would emerge from an accident uninjured if the bangle broke at the right time.

Both varieties of jade are found all over the world. Nephrite is more commonly obtained and therefore slightly less valuable than jadeite. The most valuable variety of jadeite, called imperial jade, which is prized for having a brighter, bolder green hue than the other varieties, is only mined in Myanmar (formerly Burma). Jade may also be found in China, Japan, New Zealand, Canada, Russia, and Guatemala to name a few known deposits.

Jade as a Gift

Jade is the traditional gift for a 12th wedding anniversary. It is also associated with the astrological sign of Taurus, so makes a meaningful gift for those interested in connection with their star sign. Jade is a wonderful every day stone which can be made into many different jewelry styles. Need a special gift for your upcoming anniversary or sweetheart’s birthday? Please contact us!

Pearls International has MOVED to Volusia Mall and changed our name! We are now Stradley & Daughter Jewelers, and you can find us online at www.stradleyjewelers.com. See you soon!