In my search for unique pearls, I came across an inspiring story about the origins of the famous Cartier building in New York City. The story is told that in 1915 Louis Cartier made history with the first natural, double-stranded Oriental pearl necklace costing $1.2 million ($16 million today). This necklace was placed on exhibition all over the world including Paris, London, and New York City. In the fall of 1916, the necklace’s appearance in New York reportedly caused a huge uproar with women from all over coming to admire them. Among these ladies was Mae “Maisie” Plant. At the time Cartier’s New York Salon was on the second floor of a small building in an inconspicuous part of town. Coincidently, Maisie had just placed her $1.2 million mansion up for sale. Knowing she wanted to sell her mansion anyway, Maisie approached Cartier and proposed a trade…the mansion for the pearl necklace. Surprisingly, Cartier accepted. Ever since that exchange, the Cartier firm has been located in the former Plant mansion and has come to be a great landmark for tourists in New York City. 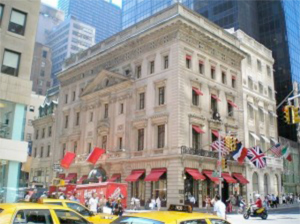 Regrettably, things did not go as well for Maisie as with Cartier. Seeing how she didn’t anticipate the depression, war, or the introduction of cultured pearls her necklace did not end up being an even trade. Maisie died in 1956 and in 1957, her $1.2 million necklace was sold at auction for a mere $170,000; the current value of the Fifth Avenue mansion I’ll leave to your imagination. More recently, in 2004, a similar natural, double-strand pearl necklace sold at Christie’s for $3.1 million. Because only one gem-quality pearl is uncovered from every 25,000 wild oysters found in the ocean, these pearls are considered the rarest in the world today. If only Plants’ heirs had held on to her necklace for a few more decades, they could have sold Maisie’s pearls for much more!