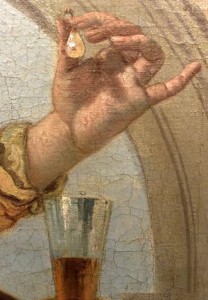 There were two Pearls, the very largest that ever were known in any Age, and they were possessed by Cleopatra,the last Queen of Egypt ; having descended to her by means of the Kings of the East. When Antony had feasted her Day by Day very sumptuously, and under the Influence, at one Time, of Pride and petulant Disdain, as a Royal Harlot, after undervaluing his Expense and Provision, he demanded how it was possible to go beyond this Magnificence : she replied, that she would consume, in one Supper, 100 hundred thousand Sestertii. Antony desired to learn how that could be possible, but he thought it was not.

Wagers were, therefore, laid ; and on the following Day, when the Decision was to be made (for that a Day might not be lost, Antony appointed the next succeeding one), she provided a Supper, which was, on the whole, sumptuous; but Antony laughed at it, and required to see an Account of the Particulars. But she said, that what had been served up already was but the Over-measure, and affirmed still, that she would in that Supper make up the full Sum; and herself alone consume in this Supper 600 hundred thousand Sestertii. She then commanded the second Table to be brought in. As soon as the Order was given, the Attendants placed before her one only Vessel of Vinegar, the Strength and Sharpness of which wasted and dissolved the Pearls. Now she wore at her Ears that most remarkable and truly singular Work of Nature. Therefore, as Antony waited to see what she was going to do, she took one of them from her Ear, steeped it in the Vinegar, and when it was liquefied, drank it. As she was about to do the like by the other, L. Plancius, the Judge of that Wager, laid hold upon it with his Hand, and pronounced that Antony had lost the Wager; whereat the Man became very angry. The Fame of this Pearl may go with its Fellow; for after this Queen, the Winner of so great a Wager, was taken Prisoner, the other Pearl was cut in two, that the half of their Supper might hang at the Ears of Venus, in the Pantheon, at Rome.